The Bluebird Flies in Bluebird Skies 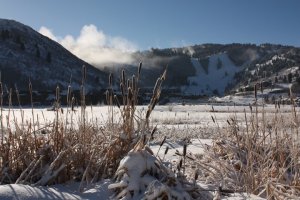 I like to drive, a lot.  My car, which I nicknamed “Bluebird” is more than my travel companion, she’s often my vehicle to happiness, if not my source of it.  John Steinbeck traveled with his poodle, Charley, so I guess my “Charley” is Bluebird.

In mid-December, while on one of my little Bluebird road trips, I found myself in Evanston, Wyoming because a winter storm with icy conditions had the Interstate shut down.  That evening I was talking on the phone to a friend about my unplanned stop, and he mentioned that I was so close to Park City, Utah.  He felt that it only made sense to go check it out.  At least since August I’ve had many people suggest that I take a drive there for photography, writing, or even a winter job.  Park City is a place that the “new” ski bums migrate to, as well as artists.  Of course, Park City is also famous for hosting the Sundance Film Festival (www.sundance.org ) in late January.

After a hot shower and a good night’s rest, I woke up to below zero temperatures, no hot water because the pipes froze, and a very gracious front desk host with repeated apologies.  No worries.  I just let my car warm up for about an hour, and was off to the mountain ski town of Park City. 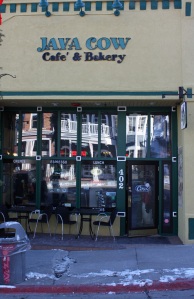 The Interstate had been reopened, the road was mostly ice-free, and the sky was clear.  It was a bitter cold morning that reminded me a little of my childhood winters in Wisconsin.  When I got to Park City at about 8 am, I headed to the historic downtown area.  I found it to be quiet and easy to find free parking.  The first block I walked on Main Street I found Java Cow Café & Bakery.  Another Wisconsin connection – cows.

When I went into the café, I found only two customers, both reading newspapers while drinking their morning coffee.  To the left was another room which was both an ice cream parlor and gift shop.  It was cute and probably a great place to bring kids.  The coffee shop itself had a wonderful bakery display which Luciana, the assistant manager, told me was filled with homemade items.  It reminded of Blue Spoon Creamery Café in Prairie du Sac, Wisconsin with the selection of coffee, baked goods, sandwiches, and ice cream.  Well, at Blue Spoon its frozen custard, something I did not find in Park City. 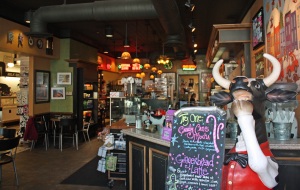 I decided to have what I call a “German Breakfast” which simply means a sweet and coffee.  The pecan bars were large, the pastry looked buttery, and the price was surprisingly reasonable.  Privately I toasted my breakfast “to Gregory” – my German father who really did eat cake for breakfast and his coffee would really be a “Java Cow” with more milk than coffee in his cup.  I ate most of the pecan bar which was delicious, but I couldn’t finish it – it was just too big and rich. 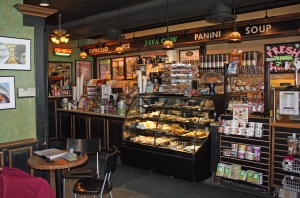 Before leaving, I stepped up to the counter and asked the women working there about Park City.  They both lived there year-round and loved it.  They gave me recommendations for skiing, dining, shopping, and other things to do.  When I told them a childhood friend would be visiting with his family in February, they suggested Deer Valley as the place to ski.  They both agreed that one of the four Marriott hotels would be perfect for a family to stay.

The Main Street was filled with shops and restaurants and would’ve been more enjoyable to walk if it was later, when the shops were open, and about 20 degrees warmer.  From there I headed to Deer Valley and found it quaint and very beautiful.   It was one of Park City’s famous bluebird sky mornings – clear and bright.  Resort shuttles were just beginning to pull up at the mountain and dropping off skiers.

My visit to Park City on a Bluebird Sky morning was a great way to start the day.

2 Comments on “The Bluebird Flies in Bluebird Skies”

Coffee Shop Cruising led to My Road to Zion…

finding beauty, love, and god in the desert southwest.